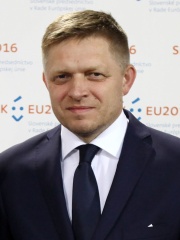 Robert Fico (Slovak pronunciation: [ˈrɔbert ˈfitsɔ]; born 15 September 1964) is a Slovak politician who served as the prime minister of Slovakia from 2006 to 2010 and from 2012 to 2018 (when he resigned). He has been the first leader of the Direction – Social Democracy (SMER-SD) party since 1999. First elected to Parliament in 1992 (whilst within Czechoslovakia), he was later appointed to the Council of Europe. Read more on Wikipedia

Among politicians, Robert Fico ranks 8,281 out of 15,577. Before him are Erishum I, García Fernández of Castile, Emperor Sanjō, Sengge Rinchen, Antoni Radziwiłł, and Nouhak Phoumsavanh. After him are Donald II of Scotland, Floris I, Count of Holland, Sharof Rashidov, Nguyễn Minh Triết, Duchess Frederica of Württemberg, and Gertrude of Saxony.