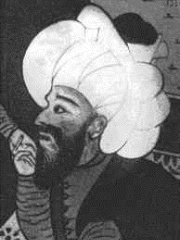 Ala al-Dīn Ali ibn Muhammed (1403 – 16 December 1474), known as Ali Qushji (Ottoman Turkish : علی قوشچی, kuşçu – falconer in Turkish; Latin: Ali Kushgii) was a Timurid theologian, jurist, astronomer, mathematician and physicist, who settled in the Ottoman Empire some time before 1472. As a disciple of Ulugh Beg, he is best known for the development of astronomical physics independent from natural philosophy, and for providing empirical evidence for the Earth's rotation in his treatise, Concerning the Supposed Dependence of Astronomy upon Philosophy. Read more on Wikipedia

Among people born in 1403, Ali Qushji ranks 6. Before him are Charles VII of France, Basilios Bessarion, John IV of Trebizond, Louis III of Anjou, and Maria of Aragon, Queen of Castile. After him are Giovanni di Paolo and Louis VIII, Duke of Bavaria. Among people deceased in 1474, Ali Qushji ranks 5. Before him are Guillaume Du Fay, Henry IV of Castile, 1st Dalai Lama, and Mahmud Pasha Angelović. After him are Pietro Riario and Nicolò Marcello.

Among ASTRONOMERS In Uzbekistan