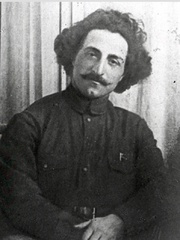 Sergo Konstantinovich Ordzhonikidze, born Grigol Konstantines dze Orjonikidze (24 October [O.S. 12 October] 1886 – 18 February 1937), was a Georgian Bolshevik and Soviet politician. Born and raised in Georgia, Ordzhonikidze joined the Bolsheviks at an early age and quickly rose within the ranks to become an important figure within the group. Arrested and imprisoned several times by the Russian police, he was in Siberian exile when the February Revolution began in 1917. Read more on Wikipedia

Sergo Ordzhonikidze was a Soviet politician who was the Chairman of the Council of People's Commissars of the Georgian SSR from 1922 to 1936. He was also a member of the Politburo of the Communist Party of the Soviet Union from 1926 to 1930.

Among politicians, Sergo Ordzhonikidze ranks 2,346 out of 15,710. Before him are Nynetjer, Vojislav Koštunica, Omar Bongo, Hermann von Salza, Eudokia Makrembolitissa, and Barbara of Portugal. After him are Adad-nirari III, Abe no Seimei, Gina Haspel, Kim Koo, Archduchess Maria Anna of Austria, and Afonso VI of Portugal.