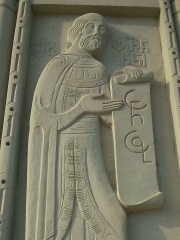 Pharnavaz I (; Georgian: ფარნავაზ I Georgian pronunciation: [pʰɑrnɑvɑz]) was a king of Kartli, an ancient Georgian kingdom known as Iberia in classical antiquity. The Georgian Chronicles credits him with being the first monarch founding the kingship of Kartli and the Pharnavazid dynasty, while other independent chronicles, such as The Conversion of Kartli make him the second Georgian monarch. Based on the medieval evidence, most scholars locate Pharnavaz's rule in the 3rd century BC: 302–237 BC according to Prince Vakhushti of Kartli, 299–234 BC according to Cyril Toumanoff and 284–219 BC according to Pavle Ingoroqva. Read more on Wikipedia

Pharnavaz I of Iberia is most famous for conquering Armenia and founding the Kingdom of Iberia.

Among politicians, Pharnavaz I of Iberia ranks 2,871 out of 15,710. Before him are Agnes of Merania, John I of Aragon, Wilhelm Cuno, Eric IV of Denmark, Princess Astrid, Mrs. Ferner, and John George III, Elector of Saxony. After him are Al-Walid II, Carlos Hugo, Duke of Parma, Sancho II of Castile and León, Luís Filipe, Prince Royal of Portugal, Archduke Charles Joseph of Austria, and Frederick II, Duke of Austria.

Others Deceased in 234 BC