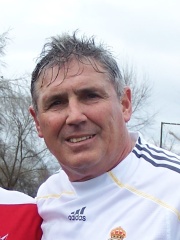 Carlos Alonso González (born 23 August 1952), known as Santillana, is a Spanish former footballer who played as a striker. Best known for his Real Madrid spell, which consisted of 17 La Liga seasons and 643 competitive matches, he was known for his stellar heading ability despite not reaching 1.80m, courtesy of his elevation, and was widely regarded as one of the best strikers in the history of Spanish football.The recipient of more than 50 caps for Spain, Santillana represented the nation in two World Cups and as many European Championships. Read more on Wikipedia

Since 2007, the English Wikipedia page of Santillana has received more than 9,424 page views. His biography is available in 33 different languages on Wikipedia (up from 31 in 2019). Santillana is the 493rd most popular soccer player (up from 586th in 2019), the 600th most popular biography from Spain (up from 654th in 2019) and the 31st most popular Spanish Soccer Player.

Page views of Santillanas by language