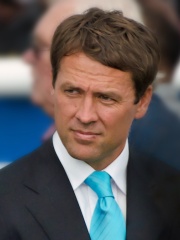 Michael James Owen (born 14 December 1979) is an English former professional footballer who played as a striker for Liverpool, Real Madrid, Newcastle United, Manchester United and Stoke City, as well as for the England national team. Since retiring from football in 2013, he has become a racehorse breeder and owner and regularly features as a sports pundit and commentator.The son of former footballer Terry Owen, Owen was born in Chester and began his senior career at Liverpool in 1996. Displaying rapid pace and composed finishing, he progressed through the Liverpool youth team and scored on his Premier League debut in May 1997, becoming the club's youngest goalscorer, at 17 years, 143 days. Read more on Wikipedia