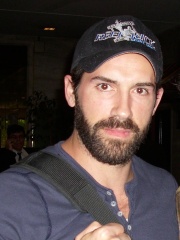 Scott Edward Adkins (born 17 June 1976) is an English actor, producer, screenwriter, gymnast, and martial artist. He has played Russian prison fighter Yuri Boyka in the 2006 film Undisputed II: Last Man Standing and its two sequels, Undisputed III: Redemption (2010) and Boyka: Undisputed (2016); Casey Bowman in the 2009 film Ninja and its 2013 sequel Ninja: Shadow of a Tear; John, the main protagonist of Universal Soldier: Day of Reckoning, and has appeared in The Bourne Ultimatum and Zero Dark Thirty. Read more on Wikipedia

Since 2007, the English Wikipedia page of Scott Adkins has received more than 5,509,731 page views. His biography is available in 37 different languages on Wikipedia making him the 952nd most popular actor.