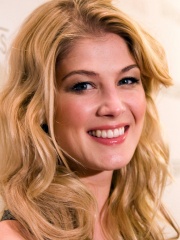 Rosamund Mary Ellen Pike (born January 27th, 1979) is a British actress. Her accolades include a Golden Globe Award, a Primetime Emmy Award and an Academy Award nomination. She began her acting career by appearing in stage productions such as Romeo and Juliet, alongside Paul Ready, and Gaslight. Read more on Wikipedia

Rolling Stone
‘The Breakdown’ With Rosamund Pike and Director J Blakeson
I Care a Lot star and filmmaker discuss their inspiration for con artist film
Claire Shaffer
Variety
Rosamund Pike Says ‘I Care A Lot’ Has ‘Reawoken Conversations About Conservatorship’
Rosamund Pike has a track record of getting audiences talking with her daring performances — but an unexpected bonus from her Golden Globe-winning turn in “I Care A Lot” has been a conversation about some of the most scrutinized members of society. In a virtu…
varietymattdonnelly
Deadline
Rosamund Pike Equates Resonance Of Netflix’s ‘I Care A Lot’ To ‘Gone Girl’ – Golden Globes Backstage
In a surprise win tonight in the Best Actress Comedy Musical category, Rosamund Pike took home the Golden Globe for the Netflix feature I Care a Lot in which she plays Marla, a con artist who swindles the elderly. Despite being a Netflix movie, and not massiv…
anthonypauldalessandro
Eonline.com
Rosamund Pike Throws Shade at Rudy Giuliani During 2021 Golden Globes Acceptance Speech
Rosamund Pike had to endure a lot while filming I Care a Lot, but according to the actress, she could have had it worse. The 42-year-old star won the Best Performance by an Actress in a...
Ryan Gajewski