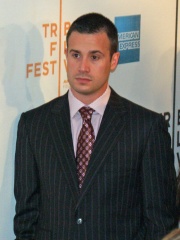 Deadline
Freddie Prinze Jr. Says He Was Asked To Take A Pay Cut For ‘Scooby-Doo 2’ So Costars Could Get A Raise
Freddie Prinze Jr. is recalling a frustrating time in his acting career while he was signing up to star in the Scooby-Doo sequel. The actor revealed that the studio asked him to take a pay cut after his costars asked for a raise. “I remember thinking, ‘Hold u…
Armando Tinoco
Livejournal.com
Brendan Fraser Talks to Freddie Prinze Jr About Trauma and Transformation
“You can light me on fire, push me off camels, beat me up, throw me down, and I’ll get up, patch it up, and try it again." #BrendanFraser spoke to @freddieprinze_ about his return to the big screen in Darren Aronofsky's @TheWhaleMov ⭐ Winter 2022 Issue. https…
shangri__la
IndieWire
Freddie Prinze Jr. Reveals ‘Scooby-Doo 2′ Pay Cut for Co-Stars’ Salaries: ‘Screw That’
"We made you guys three-quarters of a billion dollars, you can't afford to pay them what I’m making on this?" Prinze Jr. said.
Samantha Bergeson
Variety
Freddie Prinze Jr. Got Angry With ‘Scooby-Doo’ Franchise After Studio Requested Pay Cut to Boost Co-Stars’ Salaries: ’Screw That’
Freddie Prinze Jr. revealed in a recent Esquire interview that he grew furious with the “Scooby-Doo” franchise after he was asked to take a pay cut on the second film, 2004’s “Monsters Unleashed,” in order to boost the salaries of his co-stars. Prinze Jr. sta…
Zack Sharf