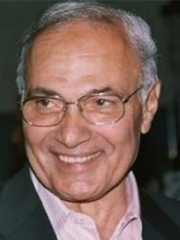 Ahmed Mohamed Shafik Zaki (Arabic: أحمد محمد شفيق زكى, IPA: [ˈæħmæd mæˈħæmmæd ʃæˈfiːʔ ˈzæki]; born 25 November 1941) is an Egyptian politician and former presidential candidate. He was a senior commander in the Egyptian Air Force and later served as Prime Minister of Egypt from 29 January 2011 to 3 March 2011 under Hosni Mubarak. After a career as a fighter pilot, and squadron, wing and group commander, Shafik was the Commander of the Egyptian Air Force from 1996 to 2002, reaching the rank of air marshal. Read more on Wikipedia

Among politicians, Ahmed Shafik ranks 7,390 out of 15,577. Before him are Guido Cantelli, Fulk I, Count of Anjou, Joop den Uyl, Ronald Inglehart, Julius Dorpmüller, and Guðni Th. Jóhannesson. After him are Adelaide of Paris, Prince Rupert of the Rhine, Tokugawa Ieshige, Tetricus II, Henry Casimir II, Prince of Nassau-Dietz, and Sayyida al Hurra.