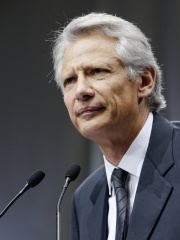 Dominique Marie François René Galouzeau de Villepin (French: [dɔminik də vilpɛ̃] (listen); born 14 November 1953) is a French politician who served as Prime Minister of France from 31 May 2005 to 17 May 2007 under President Jacques Chirac. In his career working at the Ministry of Foreign Affairs, De Villepin rose through the ranks of the French right as one of Chirac's protégés. He came into the international spotlight as Minister of Foreign Affairs with his opposition to the 2003 invasion of Iraq, one year after his appointment to the office, which culminated with a speech to the United Nations. Read more on Wikipedia

Among politicians, Dominique de Villepin ranks 6,564 out of 15,710. Before him are Mirsaid Sultan-Galiev, Bolesław IV the Curly, Malcolm I of Scotland, Christian I, Prince of Anhalt-Bernburg, Friedrich Karl Ludwig, Duke of Schleswig-Holstein-Sonderburg-Beck, and Robert Devereux, 2nd Earl of Essex. After him are Thorvald Stoltenberg, Étienne Charles de Loménie de Brienne, Fatmir Sejdiu, Anna of Brandenburg, Gavril Radomir of Bulgaria, and Abdal-Latif Mirza.