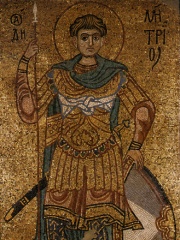 Saint Demetrius (or Demetrios) of Thessalonica (Greek: Ἅγιος Δημήτριος τῆς Θεσσαλονίκης, Hágios Dēmḗtrios tēs Thessaloníkēs), also known as the Holy Great-Martyr Demetrius the Myroblyte (meaning 'the Myrrh-Gusher' or 'Myrrh-Streamer'; 3rd century – 306), was a Greek Christian martyr of the early 4th century AD. During the Middle Ages, he came to be revered as one of the most important Orthodox military saints, often paired with Saint George of Lydda. His feast day is 26 October for Eastern Orthodox Christians, which falls on 8 November [NS] for those following the old calendar. Read more on Wikipedia

Demetrius of thessaloniki is most famous for his work in the field of pharmacology. He was the first to write about the use of opium as a painkiller.

Page views of Demetrius of Thessalonikis by language

Among religious figures, Demetrius of Thessaloniki ranks 240 out of 2,238. Before him are Vincent de Paul, Pope Fabian, Ignatius of Antioch, Maximilian Kolbe, Pope Damasus I, and Abu Talib ibn Abd al-Muttalib. After him are Amos, Pope Adrian II, Ezra, Irenaeus, Pope Nicholas I, and Joseph of Arimathea.