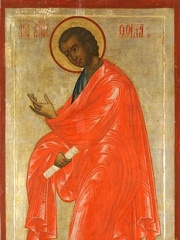 Thomas the Apostle (Aramaic: 𐡀𐡌𐡅𐡕𐡌, Biblical Hebrew: תוֹמא הקדוש or תוֹמָא שליחא (Toma HaKadosh Thomas the Holy or Toma Shlikha Thomas the Messenger/Apostle in Hebrew-Aramaic), Classical Syriac: ܬܐܘܡܐ, Tʾōmā, meaning "twin"; Koinē Greek: Θωμᾶς), also known as Didymus ("twin"), was one of the Twelve Apostles of Jesus according to the New Testament. Thomas is commonly known as "Doubting Thomas" because he initially doubted the resurrection of Jesus Christ when he was told of it (as is related in the Gospel of John alone); he later confessed his faith ("My Lord and my God") on seeing the wounds left over from the crucifixion. According to traditional accounts of the Saint Thomas Christians of modern-day Kerala in India, Thomas travelled outside the Roman Empire to preach the Gospel, travelling as far as the Tamilakam which is in South India, and reached Muziris of Tamilakam (modern-day North Paravur and Kodungalloor in Kerala State, India) in AD 52. Read more on Wikipedia

Thomas the apostle is most famous for doubting Jesus' resurrection.

Page views of Thomas the Apostles by language

Among religious figures, Thomas the Apostle ranks 61 out of 2,238. Before him are Pope Clement VII, Luke the Evangelist, Benedict of Nursia, Abu Hanifa, Hildegard of Bingen, and Pope Alexander VI. After him are Daniel, Pope Pius XI, Saint Valentine, John Chrysostom, Pope Sylvester I, and Muhammad al-Bukhari.