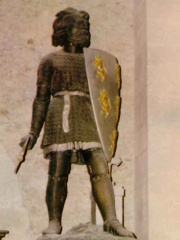 Robert the Strong (c. 830 – 866) was the father of two kings of West Francia: Odo (or Eudes) and Robert I of France. His family is named after him and called the Robertians. In 853, he was named missus dominicus by Charles the Bald, King of West Francia. Read more on Wikipedia

Robert the Strong was a Viking warrior who is most famous for his role in the Norman conquest of England.

Page views of Robert the Strongs by language

Among noblemen, Robert the Strong ranks 133 out of 843. Before him are Princess Augusta of Bavaria, Miguel I of Portugal, Béla II of Hungary, Grand Duchess Maria Alexandrovna of Russia, Hugh the Great, and Setnakhte. After him are Isabella I of Jerusalem, Giovanni di Bicci de' Medici, Francis, Duke of Saxe-Coburg-Saalfeld, Felipe VI of Spain, Harald II of Denmark, and Prince Andrew, Duke of York.

Among people born in 900, Robert the Strong ranks 12. Before him are Pope Lando, Pope Benedict VI, Pope Agapetus II, Pope Stephen VIII, Pope Leo VII, and Ahmad ibn Fadlan. After him are Berengar II of Italy, Pope Leo VIII, Guy III of Spoleto, Zoe Karbonopsina, Ohthere of Hålogaland, and Antipope Christopher. Among people deceased in 866, Robert the Strong ranks 2. Before him is Al-Kindi. After him are Linji Yixuan, Bardas, Ordoño I of Asturias, Liudolf, Duke of Saxony, Al-Musta'in, Charles the Child, and Eberhard of Friuli.