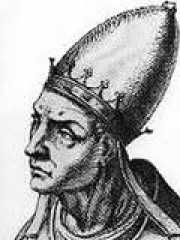 Pope Leo VIII (c. 915 – 1 March 965) was a Roman prelate who claimed the Holy See from 963 until 964 in opposition to John XII and Benedict V and again from 23 June 964 to his death. Today he is considered by the Catholic Church to have been an antipope during the first period and the legitimate pope during the second. Read more on Wikipedia

Pope Leo VIII is most famous for his 1864 papal bull, "Quanta Cura" which condemned liberalism, socialism, and communism.

Among religious figures, Pope Leo VIII ranks 649 out of 2,272. Before him are Karekin II, Romuald, John of Capistrano, Obadiah, Athenagoras of Athens, and Nachman of Breslov. After him are Muadh ibn Jabal, Hannah, Eulalia of Mérida, Karmapa, Papias of Hierapolis, and Émile Benveniste.

Among people born in 900, Pope Leo VIII ranks 14. Before him are Pope Agapetus II, Pope Stephen VIII, Pope Leo VII, Ahmad ibn Fadlan, Robert the Strong, and Berengar II of Italy. After him are Guy III of Spoleto, Zoe Karbonopsina, Ohthere of Hålogaland, Antipope Christopher, Banū Mūsā, and Theodora. Among people deceased in 965, Pope Leo VIII ranks 2. Before him is Pope Benedict V. After him are Al-Mutanabbi, Bruno the Great, Arnulf I, Count of Flanders, Hedwig of Saxony, Gero, Otto, Duke of Burgundy, and Joseph Bringas.