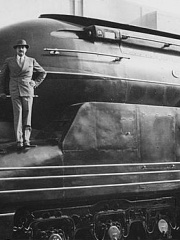 Raymond Loewy ( LOH-ee, French: [ʁɛmɔ̃ levi]; November 5, 1893 – July 14, 1986) was a French-born American industrial designer who achieved fame for the magnitude of his design efforts across a variety of industries. He was recognized for this by Time magazine and featured on its cover on October 31, 1949.He spent most of his professional career in the United States, becoming a naturalized citizen in 1938. Among his designs were the Shell, Exxon, TWA and the former BP logos, the Greyhound Scenicruiser bus, Coca-Cola vending machines and bottle redesign, the Lucky Strike package, Coldspot refrigerators, the Studebaker Avanti and Champion, and the Air Force One livery. Read more on Wikipedia

Raymond Loewy was a French-born American industrial designer. He is most famous for his design of the Coca-Cola bottle.

Among DESIGNERS In France