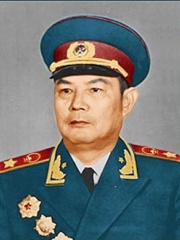 Ye Jianying (simplified Chinese: 叶剑英; traditional Chinese: 葉劍英; 28 April 1897 – 22 October 1986) was a Chinese Communist revolutionary leader and politician, one of the founding Ten Marshals of the People's Republic of China. He was the top military leader in the 1976 coup that overthrew the Gang of Four and ended the Cultural Revolution, and was the key supporter of Deng Xiaoping in his power struggle with Hua Guofeng. Read more on Wikipedia

Ye Jianying is most famous for being the general secretary of the Communist Party of China from 1978 to 1987.

Among politicians, Ye Jianying ranks 4,257 out of 15,577. Before him are Rama III, Florestan I, Prince of Monaco, Zhu Youlang, Władysław I Herman, Emperor Ningzong, and Konrad I of Masovia. After him are Amalia of Oldenburg, Parysatis II, João Goulart, Barak, Sun Xiu, and Naevius Sutorius Macro.