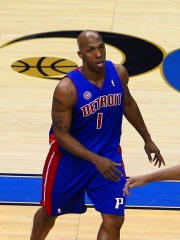 Chauncey Ray Billups (born September 25, 1976) is an American professional basketball coach and former player who is the head coach for the Portland Trail Blazers of the National Basketball Association (NBA). He played 17 seasons in the NBA. After playing college basketball with the Colorado Buffaloes, he was selected third overall in the 1997 NBA draft by the Boston Celtics. A five-time NBA All-Star and a three-time All-NBA selection, Billups played for the Celtics, Toronto Raptors, Denver Nuggets, Minnesota Timberwolves, Detroit Pistons, New York Knicks, and Los Angeles Clippers during his NBA career. Read more on Wikipedia