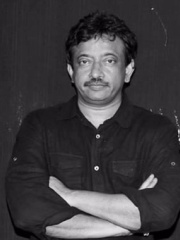 Penmetsa Ram Gopal Varma (born 7 April 1962), often referred by his initials RGV, is an Indian film director, screenwriter and producer, known for his work in Telugu and Hindi films alongside television. Varma directed films across multiple genres, including parallel cinema and docudrama noted for their gritty realism, technical finesse, and craft. Regarded as one of the pioneers of new age Indian cinema, Varma received the National Film Award for scripting the political crime drama, Shool (1999). Read more on Wikipedia

Since 2007, the English Wikipedia page of Ram Gopal Varma has received more than 4,811,866 page views. His biography is available in 15 different languages on Wikipedia making him the 1,283rd most popular film director.