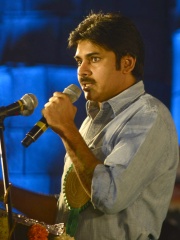 Pawan Kalyan (born Konidela Kalyan Babu; 2 September 1971) is an Indian film actor, screenwriter, stunt coordinator, philanthropist, and politician. His film works are predominantly in Telugu cinema. He is the youngest brother of the popular actor Chiranjeevi. Read more on Wikipedia

Since 2007, the English Wikipedia page of Pawan Kalyan has received more than 6,882,300 page views. His biography is available in 16 different languages on Wikipedia making him the 8,135th most popular actor.

Among actors, Pawan Kalyan ranks 8,029 out of 8,832. Before him are Kim Nam-joo, Hutch Dano, Brooke Hogan, Gia Mantegna, Jan Hooks, and Kerry Bishé. After him are Sophie Nélisse, Graham Phillips, Sophie Winkleman, Johanna Braddy, Will Kemp, and Judah Friedlander.