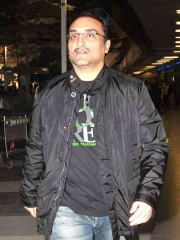 Aditya Chopra (born 21 May 1971) is an Indian filmmaker who works in Hindi cinema. His work as a director includes Dilwale Dulhania Le Jayenge (1995), Mohabbatein (2000), Rab Ne Bana Di Jodi (2008), and Befikre (2016).He is also the current Chairman of India's multi-national film, media, and entertainment conglomerate Yash Raj Films (YRF), becoming the second person to hold that position in the company's history after Sanjeev Kohli. Chopra has written and produced several commercially viable films including off-beat content not necessarily fitting into the realm of "masala films". Read more on Wikipedia