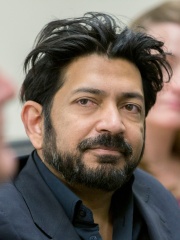 Siddhartha Mukherjee (born 21 July 1970) is a Bengali-American physician, biologist, oncologist, and author. He is best known for his 2010 book, The Emperor of All Maladies: A Biography of Cancer that won notable literary prizes including the 2011 Pulitzer Prize for General Non-Fiction, and Guardian First Book Award, among others. The book was listed in the "All-Time 100 Nonfiction Books" (the 100 most influential books of the last century) by Time magazine in 2011. Read more on Wikipedia

Among physicians, Siddhartha Mukherjee ranks 503 out of 509. Before him are Daniel Mojon, Thomas C. Jerdon, Liang Wudong, Huda Zoghbi, Bill Frist, and David Shulkin. After him are Atul Gawande, James Heilman, and Deborah Birx.

Among PHYSICIANS In India