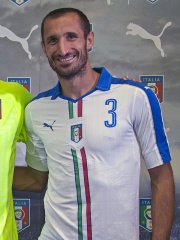 Giorgio Chiellini (Italian pronunciation: [ˈdʒordʒo kjelˈliːni]; born 14 August 1984) is an Italian professional footballer who plays as a defender and captains both Serie A club Juventus and the Italy national team. A physically strong, aggressive, and versatile defender, although he is usually deployed as a centre-back, he is also capable of playing as a left-back, both in a three or four-man defence. At club level, Chiellini began his career with Livorno in 2000, also later playing for Roma and Fiorentina, before moving to Juventus in 2005. Read more on Wikipedia

Since 2007, the English Wikipedia page of Giorgio Chiellini has received more than 2,228,525 page views. His biography is available in 59 different languages on Wikipedia making him the 624th most popular soccer player.