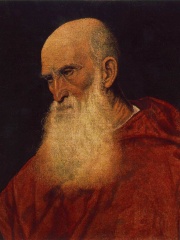 Pietro Bembo, O.S.I.H. (Latin: Petrus Bembus; 20 May 1470 – 18 January 1547) was an Italian scholar, poet, and literary theorist who also was a member of the Knights Hospitaller, and a cardinal of the Roman Catholic Church. As an intellectual of the Italian Renaissance (15th–16th c.), Pietro Bembo greatly influenced the development of the Tuscan dialect as a literary language for poetry and prose, which, by later codification into a standard language, became the modern Italian language. In the 16th century, Bembo's poetry, essays, books proved basic to reviving interest in the literary works of Petrarch. Read more on Wikipedia

Pietro Bembo was an Italian scholar and statesman who is most famous for being the author of the first modern Italian grammar.

Among writers, Pietro Bembo ranks 866 out of 5,794. Before him are Ethel Voynich, Miep Gies, Marcus Valerius Messalla Corvinus, Theodore Beza, Theodor Fontane, and Julius Fučík. After him are Waris Dirie, Cao Xueqin, Else Lasker-Schüler, Richard Matheson, Kobayashi Issa, and Nestor the Chronicler.

Among people born in 1470, Pietro Bembo ranks 10. Before him are Piri Reis, Isabella of Aragon, Queen of Portugal, Martin Waldseemüller, Hongzhi Emperor, Catherine of Navarre, and György Dózsa. After him are Francis, Count of Vendôme, Isabella of Aragon, Duchess of Milan, Juan Díaz de Solís, João I of Kongo, Tang Yin, and Fernando de Rojas. Among people deceased in 1547, Pietro Bembo ranks 8. Before him are Hernán Cortés, Francis I of France, Anne of Bohemia and Hungary, Vittoria Colonna, Saint Cajetan, and Sebastiano del Piombo. After him are Pier Luigi Farnese, Duke of Parma, Hadım Suleiman Pasha, Marie of Luxembourg, Countess of Vendôme, Henry Howard, Earl of Surrey, Johannes Schöner, and Dorothea of Denmark, Duchess of Prussia.