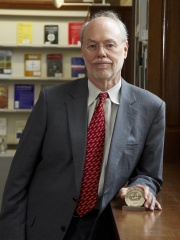 Phillip Allen Sharp (born June 6, 1944) is an American geneticist and molecular biologist who co-discovered RNA splicing. He shared the 1993 Nobel Prize in Physiology or Medicine with Richard J. Roberts for "the discovery that genes in eukaryotes are not contiguous strings but contain introns, and that the splicing of messenger RNA to delete those introns can occur in different ways, yielding different proteins from the same DNA sequence". Read more on Wikipedia

Since 2007, the English Wikipedia page of Phillip Allen Sharp has received more than 142,877 page views. His biography is available in 40 different languages on Wikipedia making him the 332nd most popular biologist.