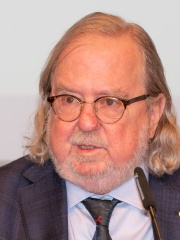 James Patrick Allison (born August 7, 1948) is an American immunologist and Nobel laureate who holds the position of professor and chair of immunology and executive director of immunotherapy platform at the MD Anderson Cancer Center at the University of Texas. His discoveries have led to new cancer treatments for the deadliest cancers. He is also the director of the Cancer Research Institute (CRI) scientific advisory council. Read more on Wikipedia

Since 2007, the English Wikipedia page of James P. Allison has received more than 623,916 page views. His biography is available in 38 different languages on Wikipedia making him the 279th most popular biologist.