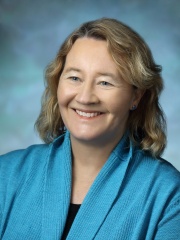 Carolyn Widney "Carol" Greider (born April 15, 1961) is an American molecular biologist and Nobel laureate. She is a Bloomberg Distinguished Professor, Daniel Nathans Professor, and Director of Molecular Biology and Genetics at Johns Hopkins University and will be joining the faculty at UC Santa Cruz as a distinguished professor of molecular, cell, and developmental biology in October, 2020. Greider discovered the enzyme telomerase in 1984, while she was a graduate student of Elizabeth Blackburn at the University of California, Berkeley. Read more on Wikipedia

Since 2007, the English Wikipedia page of Carol W. Greider has received more than 176,310 page views. Her biography is available in 59 different languages on Wikipedia making her the 297th most popular biologist.