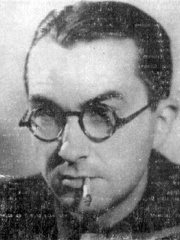 Paul-Yves Nizan (French: [nizɑ̃]; 7 February 1905 – 23 May 1940) was a French philosopher and writer. He was born in Tours, Indre-et-Loire and studied in Paris where he befriended fellow student Jean-Paul Sartre at the Lycée Henri IV. He became a member of the French Communist Party, and much of his writing reflects his political beliefs, although he resigned from the party soon after the Molotov–Ribbentrop Pact in 1939. He died in the Battle of Dunkirk, fighting against the German army in World War II. His works include the novels Antoine Bloye (1933), Le Cheval de Troie [The Trojan Horse] and La Conspiration [The Conspiracy] (1938), as well as the essays "Les Chiens de garde" ["The Watchdogs"] (1932) and "Aden Arabie" (1931), which introduced him to a new audience when it was republished in 1960 with a foreword by Sartre. Read more on Wikipedia