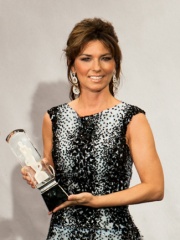 Eilleen Twain OC (eye-LEEN) (born Eilleen Regina Edwards; August 28, 1965), known professionally as Shania Twain, is a Canadian singer and songwriter. She has sold over 100 million records, making her the best-selling female artist in country music history and among the best-selling music artists of all time. Her success garnered her several honorific titles including the "Queen of Country Pop".Raised in Timmins, Ontario, Twain pursued singing and songwriting from a young age before signing with Mercury Nashville Records in the early 1990s. Read more on Wikipedia

Since 2007, the English Wikipedia page of Shania Twain has received more than 11,479,526 page views. Her biography is available in 59 different languages on Wikipedia making her the 481st most popular singer.