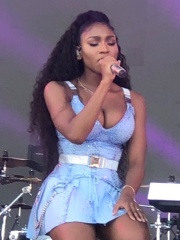 Normani Kordei Hamilton ( nor-MAH-nee; born May 31, 1996) is an American singer and dancer. She auditioned as a solo act for the American television series The X Factor in 2012, after which she became a member of the girl group Fifth Harmony. While in Fifth Harmony, Normani competed in Dancing with the Stars (2017) and released her first song outside of the group "Love Lies" (2018), a duet with Khalid, which peaked in the top ten in the US and was certified 5x platinum by RIAA. Following Fifth Harmony's indefinite hiatus, Normani collaborated with several artists, and released a two-song EP with Calvin Harris, Normani x Calvin Harris (2018). Read more on Wikipedia

Page views of Normanis by language