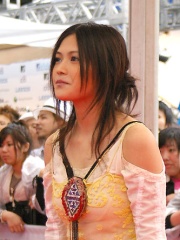 Yui (born March 26, 1987), stylized as YUI or yui, is a Japanese singer-songwriter, multi-instrumentalist, and actress. Born and raised in Fukuoka prefecture, she played live at various locations in her hometown before being noticed by Sony Music Japan when she was 17 years old, and released her debut single months later. Read more on Wikipedia

Since 2007, the English Wikipedia page of Yui has received more than 41,941 page views. Her biography is available in 33 different languages on Wikipedia making her the 1,643rd most popular singer.

Page views of Yuis by language

Among singers, Yui ranks 1,650 out of 3,001. Before her are Gary Jules, Kristina Orbakaitė, Linn Berggren, Kim Junsu, Ronnie Hawkins, and Teddy Sinclair. After her are Kurt Nilsen, Shindong, Kate McGarrigle, SZA, Benjamin Biolay, and B-Real.