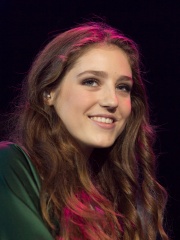 Jasmine Lucilla Elizabeth Jennifer van den Bogaerde (born 15 May 1996), better known by her stage name Birdy, is an English singer, songwriter and musician. She won the music competition Open Mic UK in 2008, at the age of 12. Her debut single, a cover version of Bon Iver's "Skinny Love", was her breakthrough, charting all across Europe and earning platinum certification six times in Australia. Read more on Wikipedia

Page views of Birdies by language

Among singers, Birdy ranks 1,918 out of 3,541. Before her are Meg White, Nichkhun, Marta Jandová, Alborosie, Siriporn Ampaipong, and Martika. After her are Billy Bragg, Rokia Traoré, Everlast, David Ruffin, Yael Naim, and Paula Fernandes.