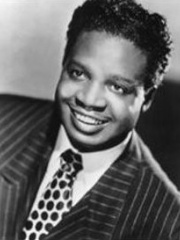 Roy James Brown (September 10, 1920 or 1925 – May 25, 1981) was an American R&B singer, songwriter and musician, who had a significant influence on the early development of rock and roll and the direction of R&B. His original song and hit recording "Good Rockin' Tonight" has been covered by many artists including Wynonie Harris, Elvis Presley, Bruce Springsteen, Paul McCartney, Joe Ely, Ricky Nelson, Jerry Lee Lewis, Pat Boone, James Brown, the Doors, and the rock group Montrose. Brown was one of the first popular R&B singers to perform songs with a gospel-steeped delivery, which was then considered taboo by many churches. In addition, his melismatic, pleading vocal style influenced notable artists such as B.B. Read more on Wikipedia

Since 2007, the English Wikipedia page of Roy Brown has received more than 23,434 page views. His biography is available in 15 different languages on Wikipedia. Roy Brown is the 1,675th most popular singer, the 9,219th most popular biography from United States and the 491st most popular American Singer.