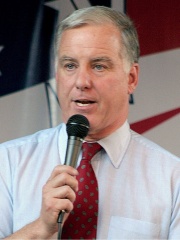 Howard Brush Dean III (born November 17, 1948) is an American physician, author, and retired politician who served as Governor of Vermont from 1991 to 2003 and Chair of the Democratic National Committee (DNC) from 2005 to 2009 and works as a political consultant and commentator. Dean was a candidate for the Democratic nomination in the 2004 presidential election. His implementation of the fifty-state strategy as head of the DNC is credited with the Democratic victories in the 2006 and 2008 elections. Read more on Wikipedia

Since 2007, the English Wikipedia page of Howard Dean has received more than 1,871,627 page views. His biography is available in 25 different languages on Wikipedia making him the 13,309th most popular politician.