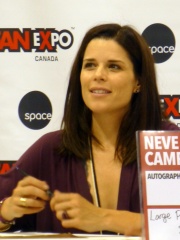 Neve Adrianne Campbell (; born October 3, 1973) is a Canadian actress, who has been noted as an influential media and popular culture figure since the late 1990s. Her accolades include two Blockbuster Entertainment Awards, a Fangoria Chainsaw Award, a Saturn Award and an MTV Award. Following a series of guest appearances, Campbell first received recognition for starring in the Canadian drama series Catwalk (1992–1994) and the family television film The Canterville Ghost (1996), before starring as Julia Salinger in the Fox teen drama series Party of Five (1994–2000), which is her breakthrough role. Read more on Wikipedia