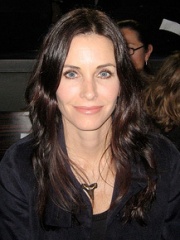 Courteney Bass Cox (born June 15, 1964) is an American actress, producer, and director. She gained worldwide recognition for her starring role as Monica Geller on the NBC sitcom Friends (1994–2004) and as Gale Weathers in the horror film series Scream (1996–2011). On television, Cox starred as Lauren Miller in the NBC sitcom Family Ties (1987–1989), Lucy Spiller in the FX drama series Dirt (2007–2008), and as Jules Cobb in the ABC/TBS sitcom Cougar Town (2009–2015), the lattermost of which earned her a Golden Globe Award nomination. Read more on Wikipedia

Since 2007, the English Wikipedia page of Courteney Cox has received more than 18,906,020 page views. Her biography is available in 63 different languages on Wikipedia making her the 484th most popular actor.