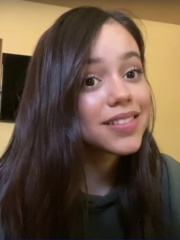 Jenna Marie Ortega (born September 27, 2002) is an American actress. She began her career as a child actress, receiving recognition for her role as young Jane in The CW comedy-drama series Jane the Virgin (2014–2019). Her breakthrough role came in portraying Harley Diaz in the Disney Channel series Stuck in the Middle (2016–2018), for which she won an Imagen Award. Read more on Wikipedia

Drunkenstepfather.com
Jenna Ortega Slutty Selfie of the Day
Jenna Ortega is pretty overhyped right now, she’s the new it girl thanks to her version of a teen Christina Rocco’s Wednesday Addams…she’s a star baby! I don’t know where she came from, but with my facial recognition blindness, she’s got the same ceiling eyes…
Jesus Martinez
Footwear News
Jenna Ortega Models Victoria’s Secret in White Babydoll Lingerie Dress
Jenna Ortega posted a selfie update on her Instagram last night. The "Wednesday" star shared a carousel of images to her account that featured photos of gothic statues and a new picture of her.
Nicole Kirichanskaya