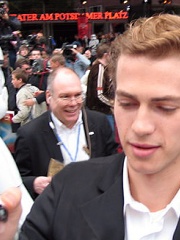 Hayden Christensen (born April 19, 1981) is a Canadian actor and producer. He began his career on Canadian television at the age of 13, then diversified into American television in the late 1990s. He was praised for his acting as Sam in Life as a House (2001), earning Golden Globe Award and Screen Actors Guild Award nominations. Read more on Wikipedia

Among actors, Hayden Christensen ranks 2,420 out of 10,030. Before him are Michael Winslow, Cherry Jones, Billy Boyd, Peter Strauss, Rob Lowe, and Lesley-Anne Down. After him are Sarah Rafferty, David Doyle, Bruce Davison, Shirley Jones, Norman Wisdom, and Marie Dressler.