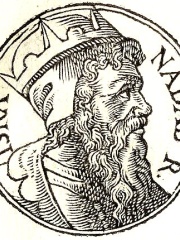 Nadab (Hebrew: נָדָב‎ Nāḏāḇ) was the second king of the northern Israelite Kingdom of Israel. Read more on Wikipedia

Nadab of Israel is most famous for being the son of Aaron the high priest and the grandson of Moses. Nadab was one of the two sons of Aaron who were killed by God for offering unauthorized fire before the Lord.

Page views of Nadab of Israels by language

Among politicians, Nadab of Israel ranks 2,067 out of 15,710. Before him are Masoud Barzani, Ismail II, Hermann Müller, Krum, Frederick III of Sicily, and Nicos Anastasiades. After him are Konstantin Päts, Ambiorix, Géza II of Hungary, Amel-Marduk, Sverre of Norway, and Emperor Hui of Han.

Others Deceased in 960 BC