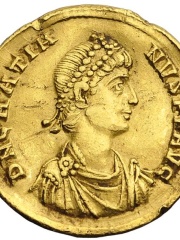 Gratian (; Latin: Flavius Gratianus; 18 April 359 – 25 August 383) was emperor of the Western Roman Empire from 367 to 383. The eldest son of Valentinian I, Gratian accompanied his father on several campaigns along the Rhine and Danube frontiers and was raised to the rank of Augustus in 367. Upon the death of Valentinian in 375, Gratian took over government of the west while his half-brother Valentinian II was also acclaimed emperor in Pannonia. Read more on Wikipedia

Since 2007, the English Wikipedia page of Gratian has received more than 485,841 page views. His biography is available in 56 different languages on Wikipedia (up from 55 in 2019). Gratian is the 694th most popular politician (down from 642nd in 2019), the 12th most popular biography from Serbia (down from 10th in 2019) and the 10th most popular Serbian Politician.

Gratian is most famous for his work "The Decretum", a collection of church law.

Page views of Gratians by language

Among politicians, Gratian ranks 694 out of 15,710. Before him are Anne of Brittany, Abu Sufyan ibn Harb, John I of France, Faisal of Saudi Arabia, Joan I of Navarre, and Camillo Benso, Count of Cavour. After him are Hideki Tojo, Herbert Hoover, Ilse Koch, Paul of Greece, Gallienus, and Saparmurat Niyazov.