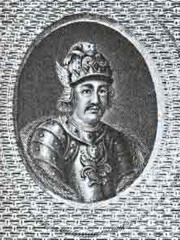 Mikhalko Yuryevich (Russian: Михалко (Михаил) Юрьевич; Ukrainian: Михайло Юрійович) (died June 20, 1176), Prince of Torchesk (mid-1160s–1173), Vladimir and Suzdal (1175–1176) and Grand Prince of Kiev (Kyiv, 1171). Yuri Dolgoruky's eldest son by his second marriage, Mikhalko Yuryevich was removed from the Suzdal lands by his half-brother Andrei Bogolyubsky, who apparently disliked his mother. From 1162 to 1169 he lived in Ostyor, a small town near Chernigov, but then moved on to a town of Torchesk. Read more on Wikipedia

Page views of Mikhail of Vladimirs by language

Among politicians, Mikhail of Vladimir ranks 6,873 out of 15,710. Before him are Henry III, Duke of Brabant, Conrad I of Burgundy, Kaykaus I, Petru Rareș, Sergio Oliva, and Tokugawa Ieharu. After him are Quintus Pedius, Daru of Baekje, Jorge Eliécer Gaitán, Princess Margaret Yolande of Savoy, Zénaïde Bonaparte, and Agron.

Among people born in 1145, Mikhail of Vladimir ranks 7. Before him are Attar of Nishapur, Sverre of Norway, Marie of France, Countess of Champagne, Ibn Jubayr, Maria of Antioch, and Al-Adil I. After him are Shihab al-Din 'Umar al-Suhrawardi, Margaret I, Countess of Flanders, Baha ad-Din ibn Shaddad, Theodora Komnene, Queen of Jerusalem, Ruben III, Prince of Armenia, and Sven Aggesen. Among people deceased in 1176, Mikhail of Vladimir ranks 3. Before him are Emperor Rokujō and Ibn Asakir. After him are Matthias I, Duke of Lorraine, Rosamund Clifford, and Richard de Clare, 2nd Earl of Pembroke.