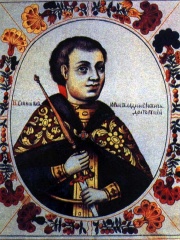 Yuri I Vladimirovich (Russian: Юрий Владимирович), commonly known as Yuri Dolgoruky or the Long Arm (Russian: Юрий Долгорукий, meaning "Far-Reaching", c. 1099 – 15 May 1157) was the first Rurikid prince to rule in the northern territory of Rostov (later Vladimir-Suzdal). Noted for successfully curbing the privileges of the landowning boyar class in Rostov-Suzdal and his ambitious building programme, Yuri transformed his Great Russian principality into the independent power that would evolve into early modern Muscovy.Yuri spent much of his life in internecine strife with the other Rurikid princes for suzerainty over the Kievan Rus, which had been held by his father (Vladimir Monomakh) and his elder brother before him. Read more on Wikipedia

Yuri Dolgorukiy is most famous for founding the city of Moscow in 1147.

Among politicians, Yuri Dolgorukiy ranks 1,955 out of 15,710. Before him are Ernest, Duke of Austria, Louise of Lorraine, Šuppiluliuma I, Beji Caid Essebsi, Michael Bloomberg, and Charles Albert of Sardinia. After him are Chlothar III, Jeongjong, 3rd monarch of Goryeo, Nikolai Podgorny, Prince Edward, Duke of Kent and Strathearn, William II of Sicily, and Raisa Gorbacheva.

Among people born in 1095, Yuri Dolgorukiy ranks 3. Before him are Roger II of Sicily and Stephen, King of England. After him are Suryavarman II, Antipope Victor IV, Amadeus III, Count of Savoy, Mesud I, Usama ibn Munqidh, William II, Duke of Apulia, and Conan III, Duke of Brittany. Among people deceased in 1157, Yuri Dolgorukiy ranks 3. Before him are Ahmad Sanjar and Alfonso VII of León and Castile. After him are Sweyn III of Denmark, Ramiro II of Aragon, Canute V of Denmark, Matilda of Savoy, Queen of Portugal, Conrad, Margrave of Meissen, Eystein II of Norway, and Dirk VI, Count of Holland.