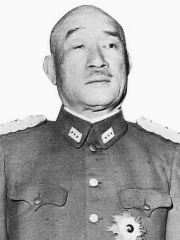 Hajime Sugiyama (杉山 元, Sugiyama Hajime / Sugiyama Gen, January 1, 1880 – September 12, 1945) was a Japanese field marshal and one of the leaders of Japan's military throughout most of World War II. As Army Minister in 1937, Sugiyama was a driving force behind the launch of hostilities against China in retaliation for the Marco Polo Bridge Incident. After being named the Army’s Chief of Staff in 1940, he became a leading advocate for expansion into Southeast Asia and preventive war against the United States. Upon the outbreak of hostilities in the Pacific, Sugiyama served as the army’s commander-in-chief until his removal by Prime Minister Hideki Tojo in February 1944. Read more on Wikipedia

Among politicians, Hajime Sugiyama ranks 6,904 out of 15,577. Before him are Pierre Bérégovoy, Su Tseng-chang, Hermann Kövess von Kövessháza, Frederick I, Duke of Anhalt, Podalirius, and Seonjong of Goryeo. After him are Thorbjörn Fälldin, Masaharu Homma, Sati Beg, Géraud Duroc, Duchess Augusta of Brunswick-Wolfenbüttel, and Kunigunde of Hohenstaufen.