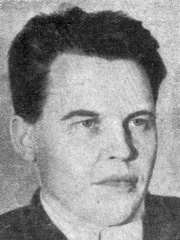 Nikolai Alekseevich Voznesensky (Russian: Никола́й Алексе́евич Вознесе́нский, 1 December [O.S. 18 November] 1903 – 1 October 1950) was the Soviet economic planner who oversaw the running of Gosplan during the German-Soviet War. A protégé of Andrei Zhdanov, Voznesensky was appointed Deputy Premier in May 1940 at the age of thirty-eight. He was directly involved in the recovery of production associated with the movement of industry eastwards at the start of the war. Read more on Wikipedia

Since 2007, the English Wikipedia page of Nikolai Voznesensky has received more than 95,040 page views. His biography is available in 17 different languages on Wikipedia making him the 7,886th most popular politician.