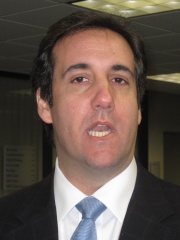 Michael Dean Cohen (born August 25, 1966) is an American disbarred lawyer who served as an attorney for U.S. President Donald Trump from 2006–2018. Cohen was a vice-president of The Trump Organization, and the personal counsel to Trump, and was often described by media as Trump's "fixer". He served as co-president of Trump Entertainment and was a board member of the Eric Trump Foundation, a children's health charity. Read more on Wikipedia

Since 2007, the English Wikipedia page of Michael Cohen has received more than 137,515 page views. His biography is available in 16 different languages on Wikipedia making him the 30th most popular lawyer.

Among lawyers, Michael Cohen ranks 43 out of 49. Before him are Clarence Darrow, Navi Pillay, Louis Brandeis, Oliver Wendell Holmes Jr., George Hadley, and Lawrence Lessig. After him are Wendell Willkie, Louise Arbour, A. V. Dicey, Scooter Libby, Ken Starr, and Christopher A. Wray.