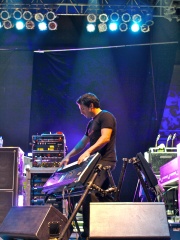 Derek Sherinian (born August 25, 1966) is an American keyboardist who has toured and recorded for Alice Cooper, Billy Idol, Yngwie Malmsteen, Steve Vai, and Joe Bonamassa. He was also a member of Dream Theater from 1994 to 1999, is the founder of Planet X and also one of the founding members of Black Country Communion and Sons of Apollo. Read more on Wikipedia

Since 2007, the English Wikipedia page of Derek Sherinian has received more than 487,448 page views. His biography is available in 25 different languages on Wikipedia making him the 1,420th most popular musician.

Among musicians, Derek Sherinian ranks 1,423 out of 2,258. Before him are Diplo, Shantel, Don Williams, Janine Jansen, Cherie Currie, and Nujabes. After him are Lily Allen, Gary Holt, Tadd Dameron, Louis Walsh, Zayn Malik, and Steve Hillage.