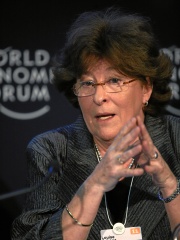 Louise Arbour, (born February 10, 1947) is a Canadian lawyer, prosecutor and jurist. She is currently the Special Representative of the United Nations Secretary-General for International Migration.Arbour was the UN High Commissioner for Human Rights, a former justice of the Supreme Court of Canada and the Court of Appeal for Ontario and a former Chief Prosecutor of the International Criminal Tribunals for the former Yugoslavia and Rwanda. From 2009 until 2014, she served as President and CEO of the International Crisis Group. Read more on Wikipedia

Since 2007, the English Wikipedia page of Louise Arbour has received more than 183,835 page views. Her biography is available in 17 different languages on Wikipedia making her the 43rd most popular lawyer.

Among lawyers, Louise Arbour ranks 45 out of 49. Before her are Louis Brandeis, Oliver Wendell Holmes Jr., George Hadley, Lawrence Lessig, Michael Cohen, and Wendell Willkie. After her are A. V. Dicey, Scooter Libby, Ken Starr, Christopher A. Wray, Irene Khan, and Amy Chua.

Among LAWYERS In Canada