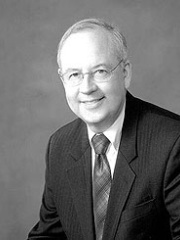 Kenneth Winston Starr (born July 21, 1946) is an American lawyer who served as a United States circuit judge and 39th solicitor general of the United States. He is best known for heading an investigation of members of the Clinton administration, known as the Whitewater controversy. Starr served as a federal Court of Appeals judge and as solicitor general for George H. W. Bush. He received the most public attention for his tenure as independent counsel while Bill Clinton was U.S. Read more on Wikipedia

Since 2007, the English Wikipedia page of Ken Starr has received more than 2,041,190 page views. His biography is available in 16 different languages on Wikipedia making him the 45th most popular lawyer.

Among lawyers, Ken Starr ranks 48 out of 49. Before him are Lawrence Lessig, Michael Cohen, Wendell Willkie, Louise Arbour, A. V. Dicey, and Scooter Libby. After him are Christopher A. Wray, Irene Khan, Amy Chua, and Hauwa Ibrahim.