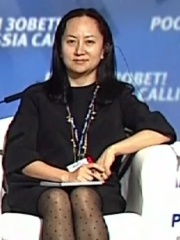 Meng Wanzhou (Chinese: 孟晚舟; born February 13, 1972; also known as Cathy Meng and Sabrina Meng) is a Chinese business executive with permanent residency in Canada, who is the deputy chair of the board and chief financial officer (CFO) of telecom giant and China's largest privately held company, Huawei, founded by her father Ren Zhengfei. On December 1, 2018, Meng was detained upon arrival at Vancouver International Airport by Canada Border Services Agency officers for questioning, which lasted three hours. The Royal Canadian Mounted Police subsequently arrested her on a provisional U.S. extradition request for fraud and conspiracy to commit fraud in order to circumvent U.S. sanctions against Iran. On January 28, 2019, the U.S. Read more on Wikipedia

Since 2007, the English Wikipedia page of Meng Wanzhou has received more than 1,047,873 page views. Her biography is available in 18 different languages on Wikipedia making her the 394th most popular businessperson.