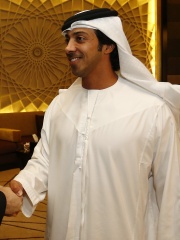 Mansour bin Zayed bin Sultan bin Zayed bin Khalifa Al Nahyan (born 20 November 1970), often referred to as Sheikh Mansour, is an Emirati royal who is the deputy prime minister of the United Arab Emirates, minister of presidential affairs and member of the royal family of Abu Dhabi. He is the half brother of the current President of UAE, Khalifa bin Zayed Al Nahyan.He is also the chairman of the ministerial council for services, the Emirates Investment Authority and the Emirates Racing Authority. He sits on the Supreme Petroleum Council and the boards of numerous investment companies including the International Petroleum Investment Company (IPIC) and the Abu Dhabi Investment Council (ADIC).Mansour also owns stakes in a number of business ventures, including Virgin Galactic and Sky News Arabia. Read more on Wikipedia

Since 2007, the English Wikipedia page of Mansour bin Zayed Al Nahyan has received more than 2,089,083 page views. His biography is available in 18 different languages on Wikipedia making him the 293rd most popular businessperson.

Others born in United Arab Emirates